The reference document for the Construction sector 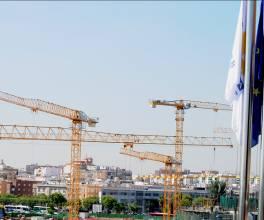 Construction activities play a major role in the socio-economic development of a country, providing building and infrastructure on which all sectors of the economy depend. Construction is thus a sector of high strategic importance.
In the EU, the construction sector as a whole represents approximately 10% of GDP and is also the largest industrial employer (30% of industrial employment), with an estimated 3.1 million enterprises in 2007 and 14.8 million employees, including 19% self-employed staff. Construction is responsible for a large share of European environmental impact: the construction process generates a huge amount of waste, consumes more than 50% of European natural resources and can affect biodiversity and soil. The main construction product, the building, is responsible for more than 30% of the European carbon footprint and more than 40% of the primary energy consumption in Europe.

For this sector, the Sectoral Reference Document is not available, whereas, only a technical report is available.

The following people are part of the JRC EMAS SRD team:

The best way to contact the JRC EMAS SRD team is sending an e-mail to JRC-EMAS-SRD@ec.europa.eu